Center for Independent Living Serbia OSI at the Serbia-EU Forum

Center for Independent Living Serbia OSI at the Serbia-EU Forum

The first Forum "Overcoming the crisis, the path towards the European Union" has held in Belgrade on 9 September 2011. Forum was opened by Serbian President Boris Tadic and President of the European Council Herman van Rompuy. Forum Serbia-EU was very important political event which was attended by senior officials of Serbia, the European Union and Western Balkan region, economic and political leaders, representatives of academic networks and NGOs.

Gordana Rajkov, MP and president of the Center for Independent Living Serbia OSI, was one of five panelists who spoke about the barriers for people with disabilities as an obstacle for inclusive growth in the panel "Social Inclusion".
In her presentation, she pointed to positive developments in government policy towards people with disabilities, especially in improving the legal framework, but also the existence of a number of problems in the everyday life of people with disabilities, particularly in the areas of accessibility, social welfare, education and employment.

Participation of representatives of the Centre as the only organization with disabilities in such a prestigious and important political, international conference, is also a recognition of the Centre work as an organization, but also the recognition of disability as an important political issue that can not be bypassed in discussions on human rights issues and joining the European Union. 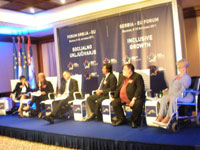